The Bernstein Centre Berlin (BCCN Berlin) celebrates its consolidation and the inauguration of the Interdisciplinary Center Computational Neuroscience (ICCN) at the Humboldt-Universität zu Berlin.

Freiburg, November 7, 2017
October 11 held double cause for celebration at the Bernstein Center Berlin (BCCN Berlin). The Centre, backbone of interdisciplinary research within the Bernstein Network Computational Neuroscience as well as the Berlin neuroscience community, celebrated the inauguration of the Interdisciplinary Center Computational Neuroscience ICCN as well as the consolidation of the BCCN Berlin with a two-day international symposium
Old friends and young scientists alike came to congratulate Professor Michael Brecht, Head of BCCN Berlin, on a job well done. Professor Larry Abbott from Columbia University New York and Professor Andreas Herz, one of the founding fathers of BCCN Berlin, today head of BCCN Munich, shared memories of the Bernstein Centers and the Bernstein Network Computational Neuroscience in Germany of the past ten years. Young scientists, like Professor Susanne Schreiber, Dr. Robert Gütig or Dr. Julijana Gjorgijeva, were grateful for the opportunities and the support the Centers and the Bernstein Network provided for their scientific careers. The six Bernstein Centers in particular account for the international reputation and interconnection of the Computational Neuroscience in Germany.
In such high spirits, Michael Brecht reflected on past, present and future of the Bernstein Center’s scientific endeavours. In Brecht’s eyes, the BCCN Berlin experienced “exciting times during which the research area had developed a great deal, times in which the computational neuroscience in Germany was boosted by the generous funding of the German Ministry of Education and Research. I am happy that our long-term partners here in Berlin have committed themselves to a sustainable long-term partnership and a scientifically exciting future.“

The welcome addresses of the Center’s institutional partners, Charité-University Clinic Berlin, Humboldt-Universität zu Berlin and Technischen Universität Berlin, were in the same vein praising the long-term fruitful cooperation across disciplines. In their eyes, the Bernstein Center was not only a platform of encounter but it played an active role in implementing strong theory-experiment cooperations.

The freshly inaugurated Interdisciplinary Center Computational Neuroscience (ICCN) at Humboldt-Universität Berlin not only embeds the computational neuroscience in Berlin but adds to the Centre’s visibility on a local, national and above all international scale as about 50% of the students come from abroad. Over the past years, the BCCN Berlin supervised 80 PhDs and about the same number of Master degrees. The ICCN also strengthens Center’s core strategy of promoting young scientists; this begins at Master level and reaches up to junior group leaders. 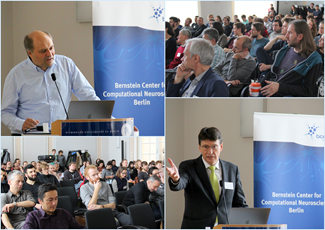